Quirkiness tempered by down-to-earth logic and mastery of beauty within the realm of fashion, make Peter Gray and the Jafia collective true one-off couture talents.

Runway Event: Asia Beauty Expo
"The most recent Jafi a presentation was held at the Asia Beauty Expo in Yokohama, which is about a 45-minute drive from Tokyo," Gray relates.
"I invited designers and fashion stylists with a penchant for street fashion to create one-off couture clothing for an avant-garde runway presentation.
To level the playing fi eld, we purchased identical black jumpsuits from a military surplus store. The challenge was to refashion each piece into a design that broke traditional fashion rules.
The same caveat applied to hair. If you would normally do a haircut a certain way, then you had to mix it up in some unconventional manner, whether it meant using your fi ngers instead of a comb or crafting an outrageous hairline with hair remover as opposed to a clipper or razor." Gray

2. "Way Perry is amazing. He's the Fashion Director for Man About Town and Menswear Editor of Wonderland magazines, and an extraordinary fashion stylist. Way refashioned his jumpsuit to include hundreds of buttons-both front and back-which totally spoke to the youth culture of Japan.
"Our model looked so sweet and young that we decided to create a hair design that resembled a futuristic English schoolboy. We cut his hair using a razor-over-comb technique to create a stepped edge and then peeled the hair down to the scalp along the perimeter." Gray
(jedroot.com/stylists-main.php)

3. "Yasuhiro Takehisa was our fashion stylist for the entire collection.
He also did this one-off fashion design by taking several jumpsuits, cutting them up and redesigning them into a shirt, trousers and man's skirt. When the model moved his arms, the edges of the skirt lifted to reveal trouser legs.
"For the hair design, we wanted to see how far we could take the cut by using a completely freestyle method. We applied cream hair remover with an birch-wood stick to defi ne the perimeters." Gray (YasuhiroTakehisa.com)

4. "Shun Watanabe is currently Fashion Editor for Vogue Hommes Japan and a freelance fashion stylist whose services are in demand around the globe.
Shun wanted to create a Ray Petri's Buffalo style that was both masculine and feminine.
We cast a hardcore businessman and tough guy with an eightpack who didn't bat an eyelash at wearing a skirt.
Love the shoulder pads and white socks peeking out over his Doc Martens!
We bleached the model's hair pale yellow, applied a strong purple color and then rinsed and rinsed until it faded to a mauve-gray." Gray (ShunWatanabe.com)

5. "A groundbreaking menswear fashion stylist and editor, Simon Foxton has a keenly honed, yet innate ability to anticipate and defi ne key shifts in menswear.
For our show, he asked for the biggest, most muscular Japanese guy we could find.
We added one more caveat, 'with hair.' "Simon re-engineered his jumpsuit to be half-street and half-sport, complete with jock socks over Doc Martens, an elbow bandage, a wristband and studs all around the sleeves.
We decided to give the model a rockabilly pompadour and use cream hair remover to redefi ne his existing hairline." Gray (clmuk.com/styling/simon-foxton)

6. "Nicola Formichetti is about as prolifi c as it can get in fashion.
He's also an original maverick.
Nicola is known for styling and designing clothing for Lady Gaga, but that's just a fraction of the who's who that he helps to make their outré best.
At the heart of his passion is deconstruction/ construction.
He does this by cutting up designer clothing and using pieces to create a new, one-off couture design.
I love the laces for their effect and the face mask for its strong message of civil unrest that's happening all over the world right now.
We went against the grain by styling the hair with Aveda Intensive Restructuring Treatment as opposed to a styling product." Gray (NicolaFormichetti.com)

7. "I adore working with Japanese hair; it can take so much abuse and still look gorgeous at the end of the day.
We pre-bleached this model's hair to pale yellow and applied a saturated cherry red. We then painted dark pieces throughout the head to complete the composition.
"The result was a neoromantic punk look, much like Keanan Duffty, who redesigned his jumpsuit into a rebellious work of art.
I wouldn't have expected anything less!
Keanan is a consummate rebel who's designed clothing for some of the most famous and outrageous rock stars on both sides of the Atlantic." Gray (KeananDuffty.com)

8. "I love everything about this image.
The designer, Jeremy Scott, is an authentic l'enfant terrible-a bad boy who does his own thing and marches to his own drummer without giving a whit for commercial sensibility.
For our collection, his design was beautifully screened onto his refashioned jumpsuit.
"The model also turned out to be a dresser's dream. He had naturally curly hair that we fashioned into a faux-hawk and used a curling iron to give it an almost androgynous feel.
We lightened all of his hair, applied a saturated fashion shade and then added dark pieces for depth and contrast.
The result was head-to-toe camp that played well for the camera and pleased the audience, which consisted mostly of hairstylists from all over Asia." Gray (JeremyScott.com)

9. "Even though you can't see the model's hair, we couldn't resist including this image in our collection for HOT.
Out of everybody currently designing and styling street fashions, Jason Farrer is the most credible. True to his nature, he wanted to cast a real 'yakuza' or Japanese gangster for his design.
My first thought was, 'OMG, we're going to be killed!'
"We found our yakuza through a traditional tattoo parlor where walk-ins defi nitely were not welcome.
He proved to be quite a handful.
We decided early on that the only way to avoid getting hurt was to give him anything he wanted, including beer at the crack of dawn." Gray (SangBleu.com/Author/Jason-Farrer) 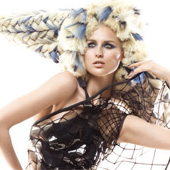 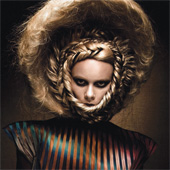 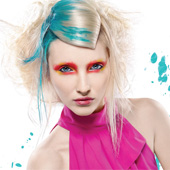