NAHA 2013 Winner!
Matt Swinney
Collection: Elements
Salon: Evolution, Minneapolis
Category: Avant Garde
Inspiration: Elements was created with the idea of making Earth's elements come alive and make art imitate life.
Bio: The fusion of art, science and creativity is the driving force behind Matt Swinney's ambition and passion for haircare. As one of L'ANZA's Creative Directors, Swinney travels the globe, motivating stylists with his inspired cutting and coloring techniques. He has been credited as a beauty genius by Elle.


4. Jake Thompson
Collection: Bianco
Salon: Lunatic Fringe, Sugarhouse, Utah
Category: Avant Garde 2013
Photographer: Jake Thompson
Inspiration: "I was drawn to the future. When I think of the future, I think of white-so much white that it drowns out everything else. The white is so powerful that it harvests up the black in the hair. Bianco is the result.
Bio: As a child, Jake Thompson knew that he was destined to become big. He was unaware of the journey that he was going to take until his mom suggested that he explore the art of hairdressing. After enrolling in hair school, he simply yearned to learn more. Through his work and educating stints for Redken, Sexy Hair Concepts and Revlon Style Masters, Thompson has developed a passion for his craft. Co-owning Lunatic Fringe Salon in Sugarhouse, Utah has made Thompson's love for education expand to heights he never thought that he could reach.


7. Donna Hamilton and Michael Albor
Collection: Coiffure Haute Couture
Salon: The Loft Salon by Michael Albor, Boston, Mass.
Category: Avant Garde 2013
Photographer: Bob Packert
Inspiration: This shoot was an inspiration that stemmed from how designers create three collections a year, but hairstylists create unique designs every day. Donna Hamilton and Michael Albor wanted to emphasis the designing aspects of hair. The collection was influenced by Alexander McQueen's dresses, which were on display at New York City's Museum of Modern Art.
Bio: As "Best Blonde Colorist" for Best of Boston 2010, Donna Hamilton believes that there are no limitations when it comes to hair. As a national Aquage educator, Hamilton has spent the past 11 years traveling the country teaching everything from long hairstyling to precision cutting at hair shows and salons. Michael Albor's salon specializes in color and form hairdressing. His artistic ability and vision translates into a truly modern look. While Albor has rave reviews in all aspects of hair care-from haircuts to extensions and event updos-color and form are his true passions. 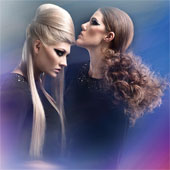 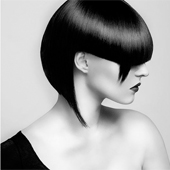 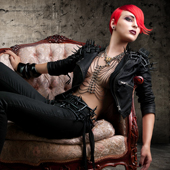