Living in Nashville, singer Frally Hynes has morphed from deep reflection to a high-energy state where all of her musings are swirling into action. Overcom-ing the angst of her divorce from singer Ben Folds three years ago, Hynes has been creatively involved in her debut album, The Light.“I’m not a country singer, but there’s something about Nashville that inspires me to write songs and perform,” Frally beams. “I’ve just completed a new video about one of my favorite songs on my album, entitled “Casualty.”

Regarding her new video—which was directed by the talented Chris Grobin (singer/actor Josh Grobin’s brother)—Frally admits, “The actual song is about breaking up, which sometimes is easy and sometimes a wreck! My Casualty video literally focuses on a car crash, which was inspired by a terrible accident that took the lives of two close friends when I was a teen. But metaphorically, it’s definitely about a terrible parting of the ways.

We shot the video in Babcock Park in Los Angeles, as well as along an isolated stretch of highway near Palmdale, California.” As for the Palm-dale portion of filming—an area known for its desert landscape—Frally laughs as she recalls dodging trucks that were constantly barreling down the road during filming. “I also spent a lot of time on the pave-ment, which was scorching,” she reveals with amusement. “But we still managed to work over a 12-hour day and enjoyed every minute of it!”In addition to her illustrious director, “we” also included superstylist Sean James, who reported for hair duty regardless of it being his birth-day. “Sean is amazing,” gushes Frally. “I’ve worked with him for about 18 months and I can’t imagine using anyone else for my videos and photo shoots. He has this determined, creative way about him; no matter what happens or what the demands are, he’s ready, willing and able to get the job done…splendidly. When our makeup artist became hopelessly lost, he even applied some of my bruises to keep the shoot moving!”

“It was a glorious day,” agrees Sean James. “I wanted Frally’s hair to look great for the camera and move in sexy ways when the wind picked it up, which it did quite frequently. To accomplish this, I used Nordic hair extensions to create a dark flag of hair for the camera, something that was needed considering the intensity of the sunlight and constant hair movement.” James reports that Rene Furterer products sealed the deal, including Vegetal Mousse and Lacque Vegetal for hold with a touch of added moisture.

(Note: Access HOT.HairsHow.us to view Frally’s Casualty video, along with commentary by none other than James!) 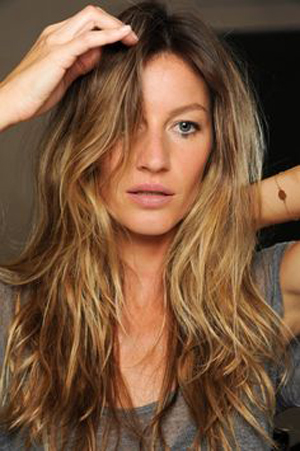